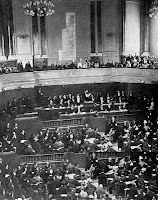 The club was born on physician Max Nordau’s (founding father of Zionism with Theodor Herzl) plea from a decade before. During a movement congress in 1898, Nordau advocated the doctrine of “muscular Judaism”, a sort of emancipation through sporting activities. “We want to restore to the flabby Jewish body its lost tone,” he declared. “Jews have to show to themselves, and to the world, how much vitality they still possess.” In his view, sport was regarded as instrumental in tackling anti-Semitism and its perception of Jews as unathletic.

Hakoah played home games on a ground in Krieau, beside the Ernst Happel Stadion. Players wore shirts with a Star of David embroidered on the chest and they were labelled as “Jewish pigs” by several rival supporters. As a form of protection from anti-Semites, the club employed its boxers and wrestlers as bodyguards outside stadia and even synagogues, as Franklin Foer accounts in his book “How Soccer Explains the World”.

Thinking to split the Hakoah era from the story of the Viennese Jewish community is like pretending to cut a trunk with a plastic knife; the team won the affection of local Jews and even author Franz Kafka is reported to have been a proud Hakoah supporter.

Nordau’s dream began to materialise after the First World War. A first, significant achievement occurred in the spring of 1923, when Scottish coach Billy Hunter and tactician Arthur Barr arranged a couple of friendly matches with West Ham United. After a 1-1 draw in Vienna, Hakoah triumphed 5-0 in London. The Hammers had fielded numerous reserves, but this could not belittle the first ever home defeat of a British football team by an international opponent.

Hakoah won the national championship in 1925, showing off an innovative style and gifted footballers. Whereas right winger Sándor Nemes - also known as Alexander Neufeld - was, quoting a journalist of the Philadelphia Jewish Times, “as popular in Austria as Babe Ruth in America”, centre-half Béla Guttman probably became the most successful figure. Having contributed to the domestic title victory, he played for two seasons in New York City and then coached in thirteen different countries, leading Benfica to two European Cups.

The club’s popularity briskly increased and in 1926 the team was invited to perform in the United States in a supposed-to-be propaganda of the Zionist cause. Although players were welcomed by a cheerful Jewish local community and even received by President Calvin Coolidge at the White House, their tour caused controversy. A few rabbis harshly criticised the match calendar, as four out of eleven games were scheduled on Saturday afternoon, corresponding with the Shabbat day of rest. In the end, thousands of fans witnessed the exhibitions, with an extraordinary 46,000-people attendance at the Manhattan Polo Grounds on May Day.

Nevertheless, the tournée constituted Hakoah’s peak. Plenty of its members moved to North America and to the British Mandate of Palestine, thus affecting the club’s successive fortunes. Meanwhile the political situation deteriorated and swimmer Judith Deutsch-Haspel boycotted the Berlin Olympic Games, together with two teammates from Hakoah, in protest of Adolf Hitler; her story is told in a documentary named "Watermarks", released in 2004.

The Anschluss - Austria’s annexation to Germany in 1938 - functioned as a watershed; Hakoah’s sports facilities were confiscated, the club was disbanded by newly-formed Gauliga Ostermark, Löhner and numerous athletes met their end in concentration camps.

Although being brought back to life after the end of the Second World War by those who survived the Holocaust, Hakoah was not able to repeat its golden age. Above all, the club was living a sort of exile, as it could not repossess the subtracted facilities.

The new millennium concurred with a new era for the club. The Viennese Jewish community obtained the right to lease the club’s original fields in 2000 and purchased part of them for €10m (£8,3m) five years later. Finally, the new Hakoah’s community centre reopened on March 11th, 2008, just one day before the 70th anniversary of the Nazi takeover.

Although languishing in the lower leagues under the name of Maccabi Vienna, the football team continues to exist and players are still exhibiting the Star of David on their jerseys.

May the Force be with them.